Unicorns, almost,
for they are fading into two legends
in which their stupidity and chivalry
are celebrated. Each, fool and hero, will be an immortal.

A note on this list. Collating a list of the Realm’s great families is fraught with difficulties. Should an ancient but impoverished family like the Carricks be included or is a rich and powerful but young family like the de Monfrets a better addition? Eventually I settled on a list that endeavoured to balance authority, wealth, prestige and historical glory. I am sure many will disagree with my selections.

My efforts to succinctly describe the political and philosophical outlooks of each family are also clichéd and overly simplified. Despite this, hopefully my summaries provide a general feeling of each family’s attitudes.

A note on inheritance. The Realm’s inheritance laws follow a male-preference cognatic primogeniture system. This essentially means a daughter may inherit in an instance where she has no living brothers and any predeceased brothers have no living descendants.

The de Minaes, Highest of the High

Coat of arms: A golden sun above three small golden stars, upon a black field

The de Minae’s are unarguably the richest and most powerful family in the Realm. They can trace their line unbroken back to the time of the Arentan occupation. They have steadily built their family fortunes throughout the centuries and in addition to the vast tracks of land they hold throughout the Inner Realm, they also own many of the Realm’s banks. The capital at their disposal dwarfs the economies of many smaller Circillian powers.

The family’s reactionary politics coupled with their control of the banks have made the de Minae’s the sworn enemies of the Eveners. This enmity recently culminated in the Topenham massacre, which was carried out by a de Minae raised regiment of yeomanry, and the subsequent murder of the current duke’s youngest brother, the Honourable William de Minae, in reprisal.

The de Laceys, Lords of the Lonely Islands

Coat of arms: A white ship upon a royal blue field

The wealth and splendour of the de Lacey family is only eclipsed by that of the de Minaes. One of the largest landholders in the Realm, they own almost all the land on the Lonely Isles as well as tens of thousands of acres on the mainland. They are also famed as patrons of the arts and their seat, Harlewood Palace, is generally regarded as one of the grandest and most richly appointed buildings in the nation.

They are highly jealous of their aristocratic privilege and in the last ten years have gravitated into the reactionary faction led by the de Minaes.

Coat of arms: A red stag on a field of green

When Ararn the Conqueror was confronted by the Great Dercian Revolt he realised that his eastern policy had to change. It was clear that the men to whom he had originally granted control of the east were rapacious and unforgiving and their conduct had significantly contributed to the outbreak of the insurrection. He executed or dismissed the majority of them and replaced them with the Vomeyers.

This proved a wise choice. The Vomeyers were temperate, hardworking and just and the east would never again rise in open revolt. In the two hundred years since the Vomeyers have become thoroughly ‘Dercian’. While some of the older families look down on them for this ‘rustification’, it has won them immense loyalty in the east. Of all the ducal families, the Vomeyers are clearly the most popular.

Coat of arms: A golden lark in flight upon a blue field

The de Monfret’s return to wealth and power has been meteoritic. While the family line is an old one, they suffered a string of catastrophes in the 3rd century that reduced them to penury. With the Unification, they moved east and settled in Oldfort where they became heavily involved in coal mining and shipping. Simon de Monfret took these beginnings and, through a mixture of astute business and canny investment, transformed the de Monfrets into a great merchant house. Their warehouses now crowd the shore of hundreds of Circillian ports and their great ships sail to the far corners of the world.

In 634 Simon de Monfret was made Baron of Oldfort for his efforts in support of the Realm’s war effort.

Coat of arms: A black bear upon a white field

The de Alberns hold the great fortresses of Farron in the king’s name and stand an unending watch against the Druids in the north. They are a military family and have produced countless generals and marshals for the Realm. Rather unfairly, they are often characterised as a grim, humourless, honour bound and somewhat provincial family by their peers.

The Bayliss’, the Hammer and Anvil

Coat of arms: A yellow sheaf of wheat upon a brown field

The Baylisses made their fortune on the back of the cotton trade. They were one of the first to build great mills and their factories have made them immensely wealthy. Highly entrepreneurial they have also begun to use the tainted within their workforce, which has only increased their output and grown their fortune. Politically they are one of the more progressive of the great families and often work in close cooperation with the Vomeyers, de Monfrets and Hightowers.

The Hamiltons, Children of Pride

Coat of arms: A black unicorn upon a pale blue field

The swiftness with which the Hamilton’s put down the Great Dercian Revolt convinced Ararn the Conqueror’s to spare them when he purged the rest of the Eastern Nobility. The Hamilton’s brush with ruin did nothing to change their proud bearing. Unlike the Vomeryer’s who quickly adopted Dercian habits and married into local families, the Hamilton’s retained, and some say even exaggerated, their haughtily ‘Emerald’ ways. Despite the enormous tracks of land owned by the family in the East, they are famous for the time they spend in the capital.

Highly conservative, in recent times they have forged an informal alliance with the de Minaes.

Coat of arms: Crossed red lances upon a white field

The heroic actions of Anne Hightower catapulted the Hightowers from their position as impoverished landless knights, to being one of the most famous families in the Realm. The family’s loyalty to the crown during the horrors of the Bishops War further elevated their status and they were rewarded with the extinct Dukedom of Northwatch. In the last century they have gained a reputation as wanderers. Their children are often educated overseas and many distant diplomatic or colonial posts are filled by members of this large and well travelled family.

This family also carries a strong thread of taint in its bloodlines. 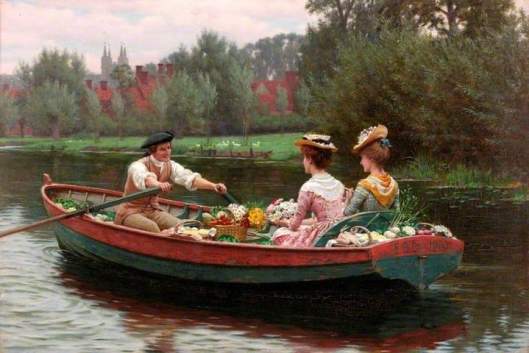 The Rochforts, Sailors and Explorers

Coat of arms: A dark blue fish leaping, upon a light yellow field

The Rochforts are an ancient family who can trace their line back to the time of the Arentan Empire. They have a long tradition of sailing and naval service and are also heavily involved in ship building. Their vast dockyards and slipways have produced many of the navy’s men of war. The current duke is a keen student of Isaladarian history and before the war took leave from the navy to lead a string of expensive expeditions out onto the Endless Steppe searching for signs of the Great King’s passing.

The Rutland-Davies, Politicians and Ministers

Coat of arms: A green tree upon a white field

The Rutland’s cleared the beasts from the dragon scorched ruins of Sunburry and were granted their Earldom by King Isaladar in recognition of this service. They steered a carefully neutral course through the Bishops War and were integral to the negotiations that lead to the eventual peace. Since then they have gained a reputation as the most overtly political of the great families. Domestically they are relatively progressive, while internationally they are aggressive defenders of Realmish power. The current Earl has been elected Lord Centurion twice and has dedicated much of his almost decade in office to thwarting the expansion of the Grand Duchy of Auerswald.

1 thought on “Great Families of the Realm”