“The air of the Realm has long been too pure for a slave, and every man is free who breathes it.”

“For me this land, that sea, these airs, those folk and fields suffice.
What purple Southern pomp can match our changeful Northern skies,
Black with December snows unshed or pearled with August haze –
The clanging arch of steel-grey March, or June’s long-lighted days?”

The Realm was created more than a thousand years ago by an alliance between Caladians who remained in the Realm after the Arentan Empire fell and the native aristocracy. Far from their home the Caladian traders and legionaries allied and inter married with the local chieftains and created the nation now known as the Realm. From these beginnings the Kings and Queens of the Realm have slowly expanded their borders to rule a mighty nation stretching from Farron in the north to Stormhaven in the south east.

With an industrial and economic power base rivaled only by Dovinae and the largest merchant fleet in the world the Realm is the richest and most industrious Circilian nation.

The nation covers the entire southern portion of the Central Isles.

The Inner Realm, lies in a vast bowl like depression, sheltered by the Mountains of Morn to the north and east and the Great Marsh to the south. At the heart of the Inner Realm lies the Green Isle and the Emerald Sea. Fed by significant precipitation and sheltered from the worst of the Circilian storms, the Inner Realm is some of the most peaceful and arable land in the world. This is a land of vast cities, industry, mines, canals and mills as well as wandering lanes and green pastures.

The Eastern Realm stretches north-south from the boundary drawn by the Fortresses of the Borderlords in the North to the Circilian Ocean in the South. East-west its borders are drawn by the Mountains of the Morn and the Great Marsh in the west and the Ocean in the east. The Eastern Realm is a wild and partly untamed land, a place were farmhouses double as fortresses and men still carry muskets for protection.

~10.5 million, of which over 7 million live within the Inner Realm.

The population of the Inner Realm is principally ethnic Realmsman. Being only recently unified the population of the Eastern Realm is still largely Dercian. The Realm is a cosmopolitan nation and the trading cities of the Realm have large foreign quarters where almost any seafaring culture will have some presence.

The birth place of Isaladar, the state religion of the Realm is Isaladarian Samaryani. Religious freedoms are guaranteed however and practitioners of countless different religions call the Realm home.

The common tongue is Circillian. As the classical language, the speaking of Caladian is widespread among the educated.

Constitutional Monarchy. The Realm is ruled by a King or Queen. Their power is far from absolute however, being roughly comparable to the power wield by the contemporary Kings of Ivanstir and Dasturia.

The Century Council is a limited democracy. Its members are elected from the limited franchise within the Realm.

The flag of the Realm is a white lion rampant carrying a lance set upon a dark blue background.

The Realm has long been sympathetic towards Ivanstir and Dovinae. While the three nations have a history of struggles, rivalry and limited naval wars, as Isaladarian trading nations, they have even more in common.

Recently the military and political attention of the Realm has been focused on limiting the expansion of the Grand Duchy of Auserwald and preventing all of the continent from falling under the boot heel of this military autocrat. To this end, the armies and fleets of the Realm played an instrumental part in defending the Grand League from the territorial ambitions of Auserwald and Caladia.

At home the Realm has had a long and bloody history of war with the Druidic Tribes of the North. Although the Realm had been in a dominant position in this struggle, the discovery of gold within Druidic lands has strengthened the Druidic hand greatly.

While we are not a warlike people, the Realm has one of the best trained and best equipped armies in Circilia. With a long tradition of military service and superlative officer training, the armies of the Realm are orderly and efficient in both peace and war. The Realm has traditionally been able to project a good deal of power onto the continent, although the recent expansion of the Druidic economy has required a larger garrison for home duties.

Army: 250,000 men serve in the standing army. Approximately 80,000 are garrisoned in the Inner Realm. The rest are either commanded by the Borderlords or the Eastern Headquarters.

Navy: Following King Coulthaine’s modernisation of the Navy and the naval yards, the Realm has the largest and most advanced Navy in the world. The backbone of the fleet are the thirty five new 74 gun ships laid down during King Coulthaine reign. In addition to these ships of the line are a dozen or so 80 and 100 gun men of war, as well as countless frigates, brigs, sloops, packets and other smaller vessels.

The navy is broken into two commands. The Emerald Command is responsible for customs work and protection of the Realm’s borders and ports, while the Stormhaven Command (or the Sea Wolves as they are known) is the blue water navy responsible for blockade duty, convoy escort, merchant raiding and other foreign duties.

The Realm is the pre-eminent trading and manufacturing nation in Circillia.

Agriculturally the Realm is self sufficient. The sheep and crops of the Inner Realm produce wool and cotton for the looms and lamb, grain and vegetables for the cities. Potato and wheat also helps cover domestic consumption and are exported in vast amounts. While the Eastern Realm may not be as arable as the Inner Realm, tens of thousands of live cattle are still exported from the East to the Continent every year.

Lately the face of the Inner Realm has been changed by the rapid growth of industry. Almost overnight thousands of factories, mills and mines have sprung up around our cities. Day and night these vast manufacturing concerns labour to produce goods and refine materials. Tireless ships and wagons carry these goods back and forth to the cities and docks.

While these industries have contributed immeasurable wealth to our great nation, it has come at a terrible cost; thousands of men, women and children die each in hellish factory conditions and large swathes of our once beautiful countryside has been scared by these dark, malevolent mills. Lately there has been much agitation in the Century Council as to the welfare of those sucked up from the yeomanry and swallowed into the great industrial towns of Farron and Mandor. 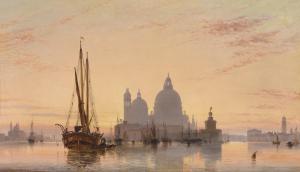 Ship building is also a major industry. As well as warships or merchantmen for Realmsmen, hundreds of vessels are made for Continental customers every year. I have heard it said that the yards of Mandor and Barbone alone produce more tonnage in a year than all of Caladia.

The strength of the Realm’s education system also means hundreds, if not thousands of skilled Realmsmen work overseas. As far away as the Empire of Iperus, artists, sailors, soldiers, engineers, merchants and architects educated in the Realm’s schools and universities can be found working in all the great cities.

A vast array of southern produce is imported into the Realm; in fact the Realm has an almost insatiable appetite for foreign goods. Dasturian and Caladian wine, glassware, velvet and silk, Ivanstir skins and hides and Bar timber and hemp are just a few examples of the goods we import in staggering amounts.

The smallest denomination of currency in the Realm is the copper penny. A copper penny is colloquially referred to as a ‘nail’.

12 copper pennies make up one half silver. A half silver is generally known as a ‘plum’.

Confusingly, six half silvers make up one silver ‘groat’.

10 groats make up one gold sovereign. A sovereign is normally referred to as a ‘crown’.

The strength and stability of the Realm’s banks means bank notes are widely accepted throughout the Realm. Promissory notes issued on amounts between 20 and 1000 sovereigns are common.

Like many Circillian nations, Caladian coins are also generally accepted as tender in the Realm’s trading cities. A silver dragon is generally taken to be worth five silver groats. A gold imperial is worth two sovereigns.

3 thoughts on “The Realm of the Mists”