The people of the Realm have never stood for tyranny or the dilution of their political liberties. We might love our king or queen, but our political system has evolved through years of struggle and battle, to be a system of checks, balances and enshrined freedoms. 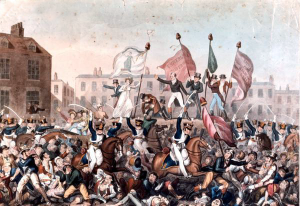 “Taxation without representation is tyranny.”

The Ranters argue that this system is still woefully inadequate and that a great tyranny of wealth, inequality and influence still lies festering at the heart of our nation. While the Ranters are often characterised as being a single entity or organisation, this isn’t the case. Three principal factions exist within the movement; the more moderate of the Ranters argue that the franchise should be extended to all adult male taxpayers, a middle position seeks enfranchisement of the entire adult population (both men and women) and finally, the radicals seek the creation of a democratic republic. Some of these zealots even argue for the destruction of personal property ownership and the entire monetary system! While their enemies generally characterise the Ranters as godless anarchist, much of their movement has close links to the clergy of the Isaladarian Church.

The Ranters can trace their birth to two prime sources. The first is the guilds. While the guilds were initially only responsible for regulating and promoting a trade, they eventually came to have a broad social responsibility. Widows and orphans of guildsmen were supported by the guild pensions, children were educated in guild schools and in the great cities guildsmen began to have a political voice through their guildmasters. These nascent democratic traditions laid many of the foundations of the modern moment. The Ranters’ second parent is the Bishops’ War. This armed struggle between the crown, the bishops and the peasantry on one side and the barons and landed gentry on the other, marked the first time the rural people were able to limit the power of the great landowners and acquire meaningful rights.

However, only in the last twenty years has the political power of the Ranters grown quickly. In the wild east, where cities are few and memories of the Druidic Wars are still fresh, their clout is still limited. But in the west, were life is more comfortable and industry grows apace, they hold numerous seats on the Century Council and get thousands to their rallies. In some unfortunate circumstances this has led to ugly confrontations with the army or the local watch. The most infamous clash was at Topenham in 633, where twenty demonstrators were killed.

Politically, the Ranters are closely allied with the Progressive Moderates.

“Drag them from their great houses; they bleed just the same as us.”

The Eveners think the Ranters are little better than blustering fools – spineless and full of nought but hot air. They believe our nation’s system is so corrupt and the power of the elite so entrenched, that only violent struggle can birth freedom. The recent, and unfortunately violent, clashes between the forces of the establishment and the Ranters have only swollen the Eveners numbers.

Hardened insurrectionists, the Eveners’ bands are said include a mixture of both idealists and hardened criminals. Many tainted who have refused registration or fear the Camar Shiem have also gravitated to the Eveners.

The Eveners do not seem to have a single method and each band appears to invent their own objective. Many are little better than common criminals gangs covered by a thin veneer of political dogma. Others are more political and make bold efforts to embarrass and undermine the government and the aristocracy. A final, more ruthless section strike at those they identify as the oppressors. These hardened cadres of villains have taken to murdering tax collectors and army officers and even attacking landowners in their great houses.

The Eveners recently suffered a serious reverse when their most famous band, the ‘Copper Hydras’, was caught outside Milbrook by the 9th Light Dragoons (the Black Falcons) and annihilated.

2 thoughts on “Ranters and Eveners”